This procedure only applies for aboveground piping and sustained conditions. It should not be applied to piping under operating conditions, where the effect of the pressure and temperature cannot be easily calculated or considered by a simple method. In this case, a detailed computational pipe flexibility and stress analysis shall be performed.

How is the allowable pipe support span calculated?

The calculation of the pipe support spacing limits the effect of the dead weight of the piping  on the deflections (sagging in the pipe) and overstresses in the sustained conditions. Therefore, it is very important for a piping designer or stress analyst to allocate the pipe supports at the right position under allowable spacing. In other words, although a piping designer could’ve  chosen the proper allowable pipe span for a certain pipe size,  there might be an excessive sagging or stress caused by a a heavy valve or large vertical pipe run within that pipe support spacing.

Therefore, there are many approaches of the simplified method to evaluate different sustained load cases based on the pipe routing or layout. However, one single allowable stress and deflection is allowed for those different scenarios or load cases.

The European code EN13480 defines a maximum deflection of 3mm (sizes less than DN50) and 5mm for pipe sizes larger than DN50 in order to avoid possible “puddle formation”. Regarding the limitation of the sustained stress, the code determines a stress limit of 40N/mm2 (40MPA) at the point of maximum bending moment. 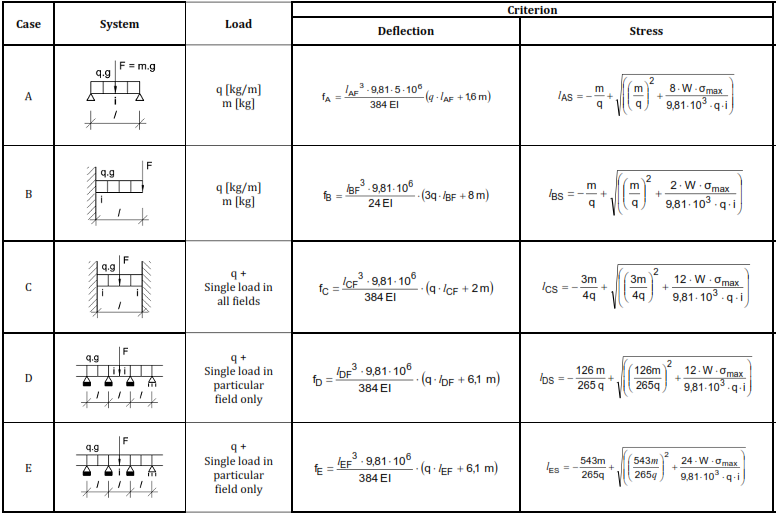 The case B represents a condition of cantilever beam in a piping system and could be considered as one of the more critical cases due to its large deflection and big moments for a given length and force.

The cases D and E are the most realistic cases when analysing a piping model. This is due to the participation of more than 2 restraints and therefore, the force and moment reactions are somehow more accurate and well- distributed along the run of the piping system. In “real pipe systems”, there are more than two (2) restrictions or constraints. However, the load case A, B and C are also a simple tool or simplified representation of a small part of a complex system.

In order to visualize the effect of the boundary conditions on a piping system and therefore, the consideration of the proper selection of the load cases, five (5) CAESAR II piping models were analysed. 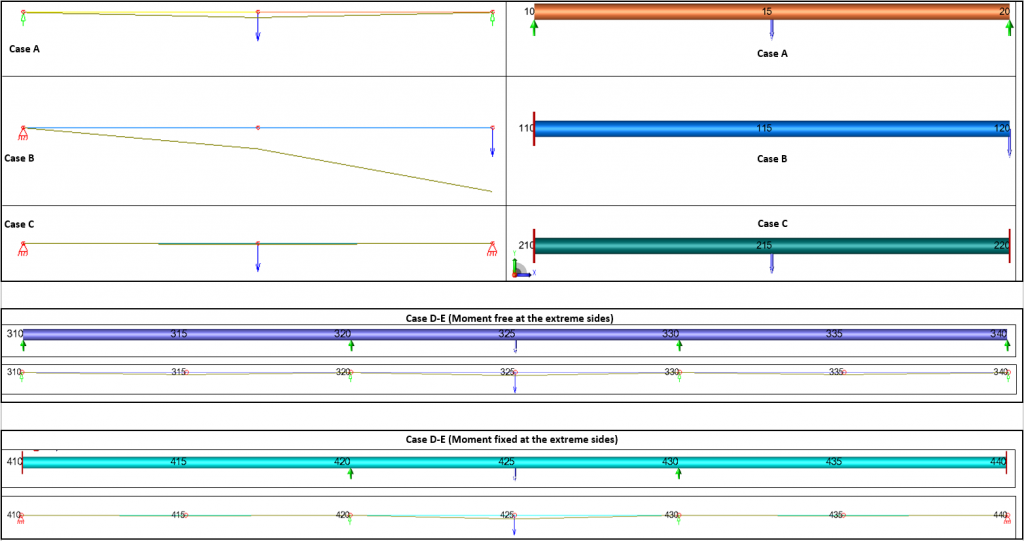 Let’s assume the material properties and operational parameters given in the picture below. F=14862.5N (6,1m pipe lenght) and the pipe support span is L=12.2mt. The pressure effect is going to be ignored, because the sustained load case (W+F1) is going to be analysed with the software CAESAR II.

Results of the 5 load cases

The deflection is 26.76mm at the node 15 in the “Case A”, while it is 6.09mm in the “Case C”. This last deflection could be almost accepted under the “limitation of deflection” criterion of 5mm for pipe sizes larger than DN50. However, the deflection of 26.76mm of the “Load Case A” must not be accepted, although it has the same geometry of the “Load Case C”. Therefore, it is very important to identify the right load case for each given piping system based on its boundary conditions.

Similarly, it can be seen that the deflections of the “Load Case D-E” with moment free supports at the extreme sides are much larger than the one with a boundary condition with moment fixed supports.

On the other hand, the beam cantilever “Case B” represents the most critical condition and the pipe support span must be much shorter than the pipe support spacing of other cases to avoid non-permissible deflections and overstresses. In the picture below, there is an overtress of almost 373,36 MPa at the node 110, which is almost 3 times larger than the allowable stress for sustained condition.

In addition, the sustained stresses in the cases A, B, C and D-E are even higher than 40MPa, which is the “stress limitation” criterion for the simplified method in sustained load condition. Only the load Case D-E with moment fixed support at the extremes, could almost accepted by this criterion  of 40MPa. Nevertheless, the deflection at the node 425 in this case is 9.06mm, which is not in accordance with the “deflection limitation” criterion of 3mm-5mm.

In conclusion, this procedure should be applied by experienced personal only or by trained people. It is up to the piping designer or pipe stress analyst to decide for which load case the simplified method is going to be used. However, one false selection of the simplified  load cases (A, B, C, D, E) could compromise the reliability and safety of a piping system.

Last but not least, stress intensification factors i (SIF’s) can reduce sifnificantly the allowable spacing of pipe supports in a piping system. This topic will be treated in another post. 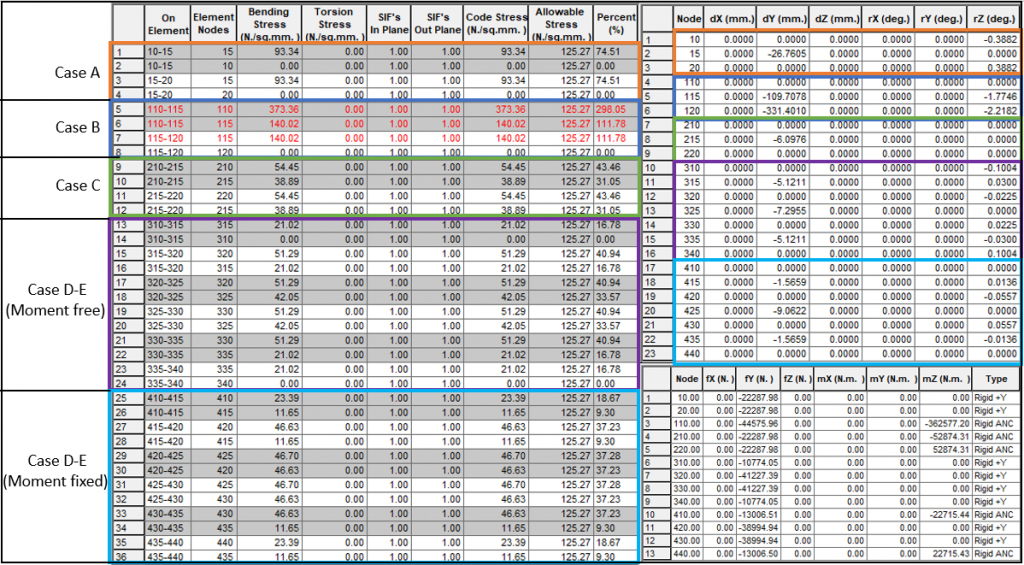 In the following table, it can be seen the allowable or standard spacing of piping supports for empty pipe (without insulation) and water-filled pipe for different insulation thicknesses 40mm and 80mm, according to the European code EN13480 (Annex Q).

In the next post, this table can be deduced by applying the “deflection and stress limitation” criterion under any given material density, piping support spans. insulation thickness, fluid density and additional forces (weight of vertical lines, valves, flanges, fittings, etc). Only a Excel table would be needed for such a analysis. 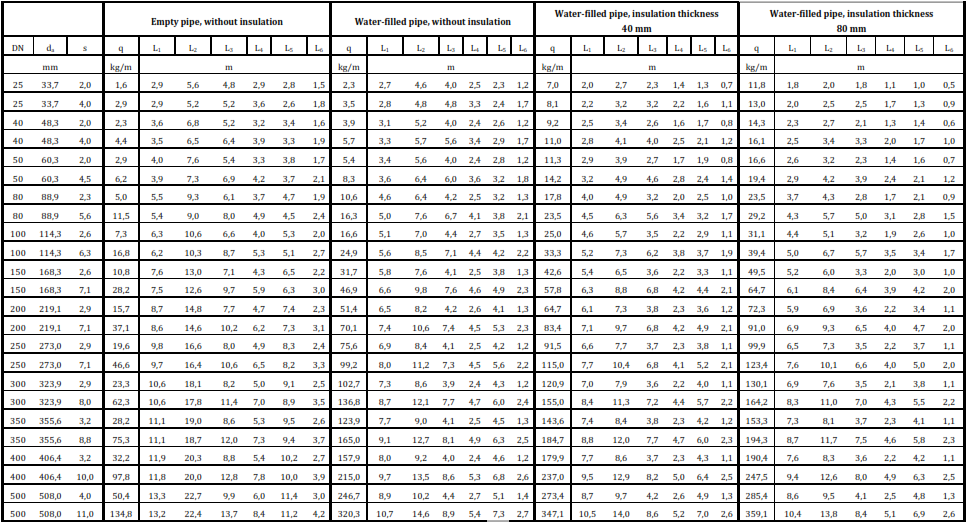