Bending moments is a crucial aspect to be considered in pipe systems to ensure its reliability and safety. Non-permissible bending moments could cause damage on equipment nozzles, excessive vertical pipe deflections and overstresses.

Where does the bending moment come from?

Sustained loads (W+P) are those produced due to internal pressure (Hoop Stress) and by the weight of the pipe, ﬁttings, insulation, ﬂuid in pipe, piping components (valves, ﬂanges, expansion joints etc).

Expansion stresses  from operating cases are caused due to temperature change (when the pipe system goes from the installed to the operating temperature). This causes the pipe to move in non-restricted points to cause bending and torsional moments.

Occasional loads  could come from , wind, earthquake, snow, vibration, etc. The event duration is a small percentage of the whole operating period of a piping system. These loads act directly on the projected area of the pipe and could generate non-permissible movements and overstresses (bending and torsional stresses). Therefore, it is important to provide a sufficient stability through the use of proper piping supports againts those occasional loads.

How to calculate the bending moment of the ASME B31.3 pipe example in Appendix S manually?

A piping designer is resposnible to deliver the isometrics (piping routing, supports, pipe materials, etc) to the pipe stress engineer.  When the pipe system is not- well supported (high pipe spanns or lack of pipe flexibility), the stress engineer must improve the pipe system through the use of additional supports. Usually, this process takes a long time until the final revision of the isometrics is well- done and therefore, the project costs increase considerably.

There is a simplified method for pipe stress analysis that evaluates the permissible pipe spans and its deflections, and also an approximation of the code stresses (such as ASME B31.3, EN 13480, etc).

The simplified evaluates the critical segments of a pipe system where there are huge pipe spans and excessive weights due to fittings, valves, large vertical lines, etc. This method can be used easily for non-critical lines by pipe designers or pipe stress engineers. If the temperature and pressure effects are not considerably critical for a line and others connection points such as, equipment nozzles, then, this method shall be used.

The B31.3 simple code-compliant model is shown below and it is going to be evaluated by using the simplified method.

Step 1: Identify the critical parts of the piping system.

The pipe element from node 10 to node 20 is not critical because the pipe span of 12.2m and its support boundary conditions are not enough to cause excessive vertical deflection and high sustained stresses.

However, the element pipe from node 20 to node 50 has the same pipe span of 12 m, but there is an additional weight (W40) of the vertical length of the pipe, which is 6.1m. This additional weight on the pipe span (12.2m) shall be considered as a critical part of the system.

The load distribution of the element from node 20 to 50 can be seen in the right picture and it is a simple representation of the simplified analysis method for this segment of the pipe. 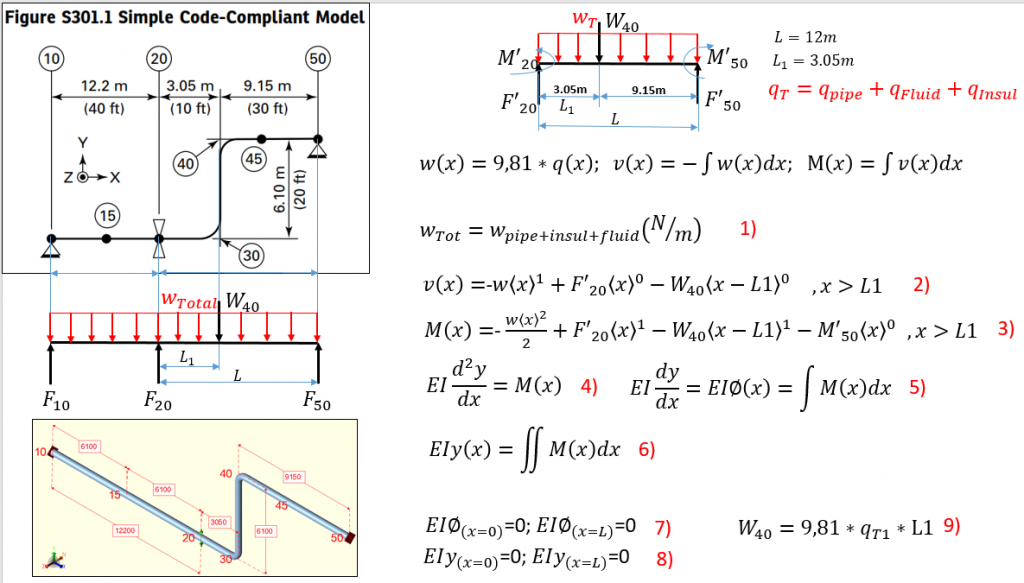 Once those formulas have been resolved, the bending moment can be calculated at the nodes 20, 30 and 50. These values are going to be compared with those of the ASME B31.3 results in this simple example. 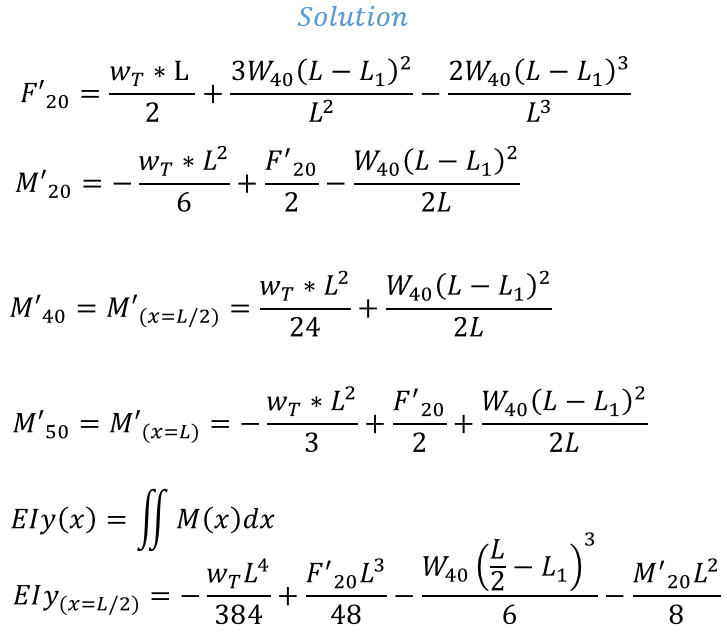 Comparison between ASME B31.3 and simplified method results

In the next picture it can be seen that the results of the simplified method for pipe stress analysis are very close to those of the ASME B31.3-Appendix S. Therefore, it is a good practice to use the simplified method for non-critical lines to estimate the deflection, bending and code stresses manually and rapidly.  Of course, a completed simplified method must be done to cover aspects such as, cantilever beams, stress intensification factors, non-restrained pipes, pipe and valve weights at different points on the pipe system. This issue will be covered by another post.

In addition, the reaction forces at the node 20 will vary considerable, when the element pipe from node 10 to node 20 is considered in the calculation. However, we are only interested in the bending moment for code stress calculation purpose. These bending moments are very similar in both methods CAESAR II and the simplified method.

In the next picture the inputs of both methods (CAESAR II and Simplified Method) are shown. 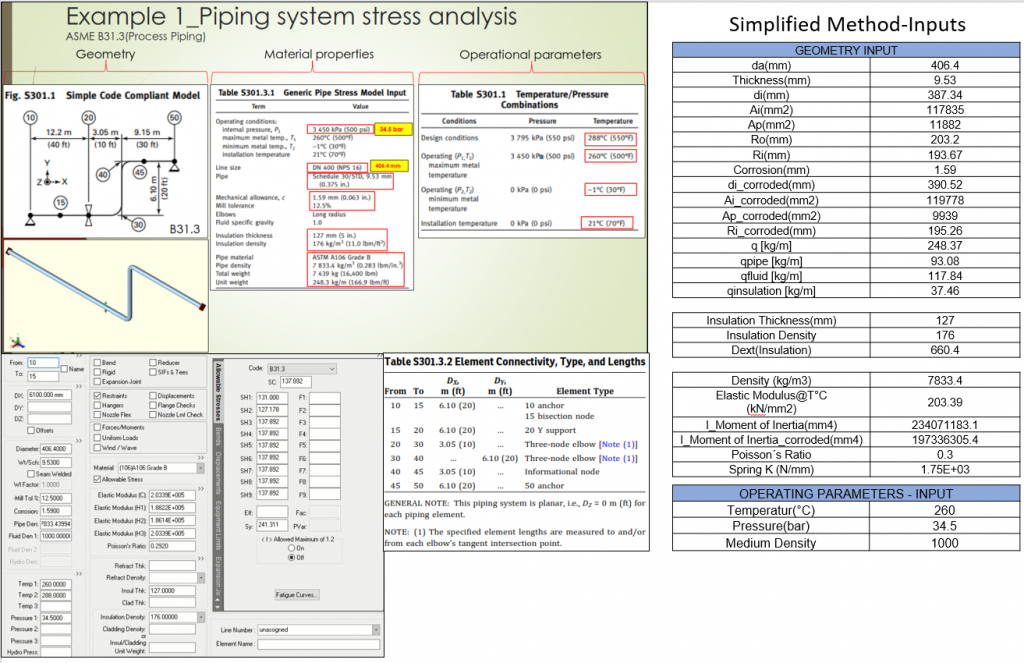